Following the pack and doing what you are told may get you a job and even a promotion, but it won’t lead to real success.

Entrepreneur Arthur Wylie, who made his first million by 26, has conquered the worlds of finance, real estate, and entertainment with more than $50 million in deals brokered and almost half a billion in assets and transactions under management. In Only the Crazy and Fearless Win BIG!, he shares a little secret that few books discuss—to win big you have to be fearless and, sometimes, even a little crazy.

Wylie outlines real-world examples from some of history and present-day’s most well-known names and everyday entrepreneurs in every industry, profession, and segment of the economy.

Only the Crazy and Fearless Win BIG! shows how their decisions raised eyebrows, dropped jaws, and met resistance—yet proved to be right.

A few crazy and fearless decisions that led to victory and success, to fame and respect:
• People Power: Henry Ford pays his workers double the industry average
• Being Fearless: CEO Steve Jobs is fired from Apple
• How Crazy: Intern-now-CEO Sean Combs’ $300 Million Clothing line beats out his entertainment business

Through Wylie’s experience and guidance, he weaves together the lessons of these stories and more to share what it means to you and your business vision. 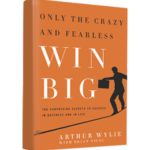